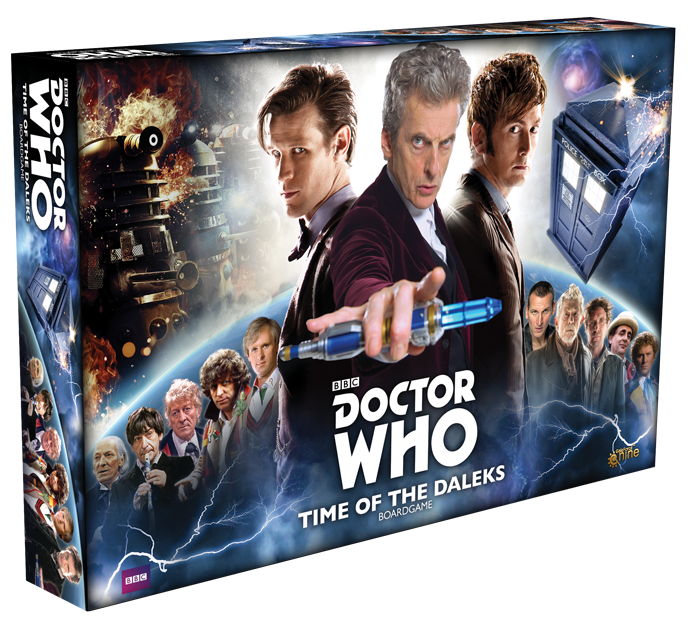 In Doctor Who: Time of the Daleks, players take on the role of the Doctor, travelling throughout time and space, finding new companions and having adventures to repair the web of time. Players do this by overcoming challenges. The Doctor can overcome most challenges he encounters, but he always needs his Companions to help give him an edge. Players must cooperate to stop the Daleks, while trying to get their TARDIS to Gallifrey first, to prevent Davros from invading the Matrix in the first place.

Somewhere, sometime, the Cloister Bell echoed throughout the heart of the TARDIS.
The Doctor started to feel a twinge, slowly turning into a searing pain. Daleks. The Doctor could see them in his memories but they were never there, that never happened. Why is Davros in the matrix? Why is he on Gallifrey?
“Doctor!” Clara screamed as she saw the Doctor vanish into thin air and reappear seconds later.
“I don’t want to alarm you Clara, but I may be ending.” The Doctor grasped his hearts and sank to his knees, fading in and out of reality.
“How can you be dying Doctor? We haven’t done anything, we’re still in the TARDIS!”
“Clara, my Clara, of course I’m not dying. I simply stopped existing for a moment. Someone is re-writing my his…” fading again, “…tory, Daleks, I see them, they’re everywhere.” The Doctor fell to the floor.
“Doctor!” Clara yelled. As she ran to his side a hologram of the First Doctor appeared in the TARDIS.
“Ah! There you are my good lad, or should I say there I am? Hmm? Yes? A bit of a pickle we find ourselves in.”
“You’re him.” Clara stood and faced the light blue hologram of the first Doctor. “I remember you.”
“Right you are my child. Glad to see I am still choosing clever travelling companions.” The hologram Doctor walked over to the TARDIS console and started flicking switches. “I am going to project a time stasis field around the TARDIS, this should stabilise our timelines.”
Stabilised in this reality, the Doctor stood up and joined the hologram of his former self. “The Daleks.”
“Yes, the Daleks are re-writing time. I can feel it, we are all feeling it. We must correct this or the damage to time itself will be irreversible.” The hologram Doctor faced the Doctor, a stern look on his face, “We need to do something about it, so stop your lollygagging and get to fixing the Web of Time!’’
And with that the hologram winked out of existence.
“Doctor, is that it? Are you going to be alright now?”
“I am stable now Clara, but no, Clara, I am far from alright.” The Doctor started frantically pushing buttons and twisting dials on the TARDIS. “And if I don’t do something soon, I will never be anything again. You might want to hang on for this bit.” Pulling a lever, the TARDIS lurched forward spinning ever faster though the time Vortex.