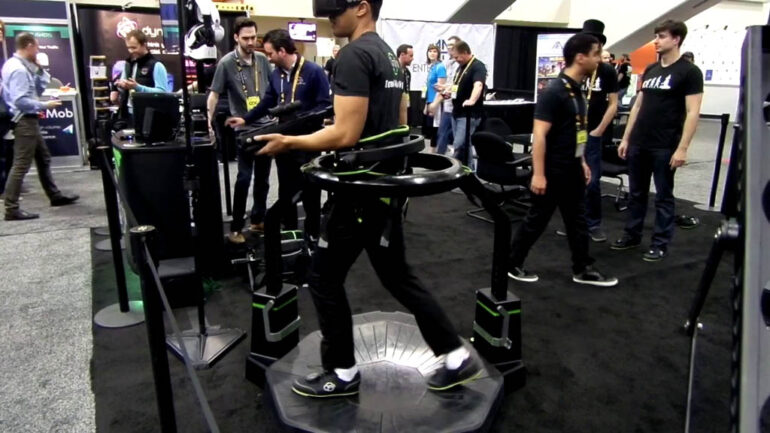 We are back from Game Developers Conference 2015 and Joacim dares to predict the future of gaming. At least for the coming year.

The first prediction is of course that we’ll see much more of Virtual Reality, VR, on the consumer market. After last years unveilment of Sony Morpheus at the GDC, this year other market leaders have jumped on the bandwagon.

Naturally we have long time player Oculus, with financial mucles from Facebook. But we are also seeing Valve’s and HTC’s Vive. Even Google with it’s Cardboard – a cheap way of making VR accessible for anybody with an Android cellphone.

There is also a growing segment of immersive VR-gear that goes beyond what you see. Top of the bunch is Virtuix with their VR-treadmill Omni, where the gamer can walk and run in place using a safety harness.

The second prediction is that the tools for creating stories and worlds in VR will become cheaper. Or even free. At this years GDC we could see that the graphics engine Source 2 from Valve released for free use. Also the Unreal Engine 4 became free as well as most of the core functions in the competing engine Unity 5.

Especially Valve commented on how they want to lower the entry for people to create and share their stories and worlds.

Finaly the third prediction is that this plethora of VR-units and easy accessable game engines will make us all into potential storytellers. We will soon be creating and shareing our worlds as we do with videos on Youtube today.

I also see a converging of storytelling. Already have the movie company Lionsgate and TV-company HBO shown interest in using VR as a part of marketing for upcoming movies and series. But I think it won’t be long before that we with the tools we have in our living room can map our selves onto non-essential characters in Game of Thrones and share that with our friends.

The coming gaming year will be very exciting, and very VR.